Introduction to "Simulate": the ReadiAnalytics feature providing Instant Insights into fatigue in schedules

Written by Stephanie Malago
Updated over a week ago

"Simulate" is a feature in ReadiAnalytics, which in turn is a component of Readi FMIS, the Fatigue Management Information System from Fatigue Science.

"Simulate" functionality is often referred to as "Instant Insights" due to its ability to provide insights on schedule-based fatigue in minutes as opposed to days or weeks with other applications.

The first step in using Simulate is to create a scenario to match your proposed schedule.

Instant Insights enables users to construct shift patterns or schedules for use in simulations via a variety of convenient methods. Input methods include:

To create a scenario, follow the steps in this article: Creating Scenarios

Once a scenario contains a schedule, sleep assumptions can easily added to the scenario.

Using Fatigue Science’s AutoSleep 2.0 algorithm, sleep simulations can automatically be configured for any schedule, based on user-defined assumptions.

The configurable sleep assumptions enable the use of a variety of sleep profiles (e.g. “Ideal”, “Moderate”, “Poor”). If customer also has sleep data from wearables, these data can be used to create custom sleep profiles.

Figure 1: Sleep and Work assumptions populated in a scenario

To populate a scenario with sleep data, follow the steps in this article: Adding Sleep Assumptions to Scenarios

Once a scenario has been fully configured with work or sleep assumptions, clicking "RUN" processes that scenario through the SAFTE™ Biomathematical Fatigue Model for processing.

The SAFTE model accepts the sleep and work parameters, and returns a predicted time series of ReadiScores, indicating the expected fatigue level at each point in the on-duty and off-duty periods within the scenario. For more information on the SAFTE Model, click here.

Once a simulation has been run and ReadiScores have been generated, a variety of charts can be automatically and instantly produced for actionable insights.

Chart types include, but are not limited to, the elements described in the figures below.

Figure 4: Chart Type of Daily Timeline, revealing predicted progression of average on-shift fatigue levels over time throughout the course of a shift pattern, with an overlay of the pattern itself. This view reveals which days in a pattern are expected to be most severe or conversely most safe and productive, and how long recovery is expected to take during a stretch of off days.

Figure 5: Chart Type of Hourly Timeline, revealing predicted progression of hourly on-shift fatigue levels for based on progression of circadian rhythm throughout the day, with an overlay of the pattern itself. This view is useful for developing an intuition of the progression of circadian rhythms, as well as to identify the peaks and troughs in expected human performance. This chart is also useful for reconstructive retrospective incident analysis, with intent to pinpoint expected fatigue level at which an incident may have occurred.

Figure 6: Chart Type of Heatmap, revealing in a single glance an hour-by-hour view of predicted fatigue levels over the course of an upcoming shift pattern, enabling instant identification of the most and least fatigued periods to expect over a month or more of shifts. This view is often used to support direct guidance to a workforce, such as using the knowledge to perform the most safety-sensitive and complex tasks at times other than the ~1% of hours in a month exhibit an outlier level of fatigue. As with the hourly timeline, this chart is also useful for reconstructive retrospective incident analysis, with intent to pinpoint expected fatigue level at which an incident may have occurred. 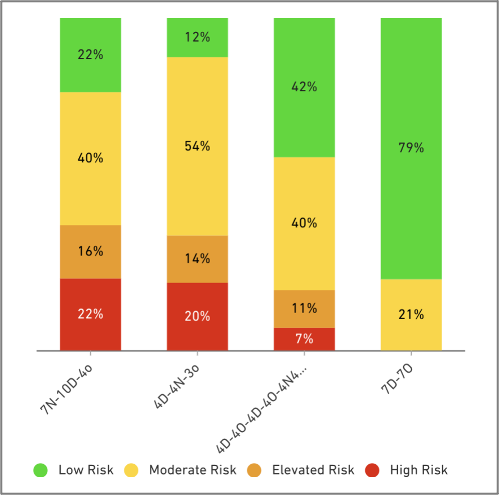 Figure 7: Chart Type of Snapshot Comparison, revealing the summary results of multiple different analyses side-by-side, for comparison of aggregate fatigue exposure between different potential scenarios or schedules. This is useful for comparing different shift patterns (e.g. 6D-6N-6o vs. 4N-3D-4o), as well as different start and end times in the same shift pattern.