Written by Robert Higdon
Updated over a week ago

One of the most common requests we have received from users of ReadiSupervise is for crew members to be display with estimated ReadiScores in the event that they have recently forgotten to track their sleep.

With the new feature Estimated ReadiScores, this is now possible!

Now, all users will receive ReadiScores in the ReadiSupervise interface, even if they have recently forgotten to track their sleep. Those users whose ReadiScores have been estimated will have an "estimation indicator" appear beside their name.

How ReadiScore Estimations are Calculated

ReadiSupervise uses advanced algorithms to fill in the gaps in the past 3 days where a user's actual sleep data is missing.

To do this, ReadiSupervise uses data regarding an individual's work schedule and their personal sleep profile.

Data Privacy Note: As is always the case, a user's actual sleep data are never revealed within ReadiSupervise. A supervisor may see an individual's estimated data, but ReadiSupervise will never display sleep information that a user recorded via their sleep tracker.

ReadiSupervise's estimation algorithm begins by considering the periods of available sleep opportunity that are afforded by an individual's work schedule. If there is a period in which sleep was expected, but not recorded, the algorithm attempts to determine the most probable quantity, quality, and timing of sleep that that individual would have received.

For example, consider the following scenario:

Figure B: the Estimation Indicator

Filtering Your Results to Show or Hide Estimated ReadiScores

As a supervisor, in some cases you may wish to see only data for users who have ReadiScores that are fully based on real, recorded sleep data.

In other cases, perhaps you wish to see only the users whose scores are estimated.

While the default view is to show all users together (those with real and those with estimated ReadiScores), you can easily filter to see the results you'd like.

Just click the "Filter" button in the upper right of the data pane, to adjust your selection, as shown below: 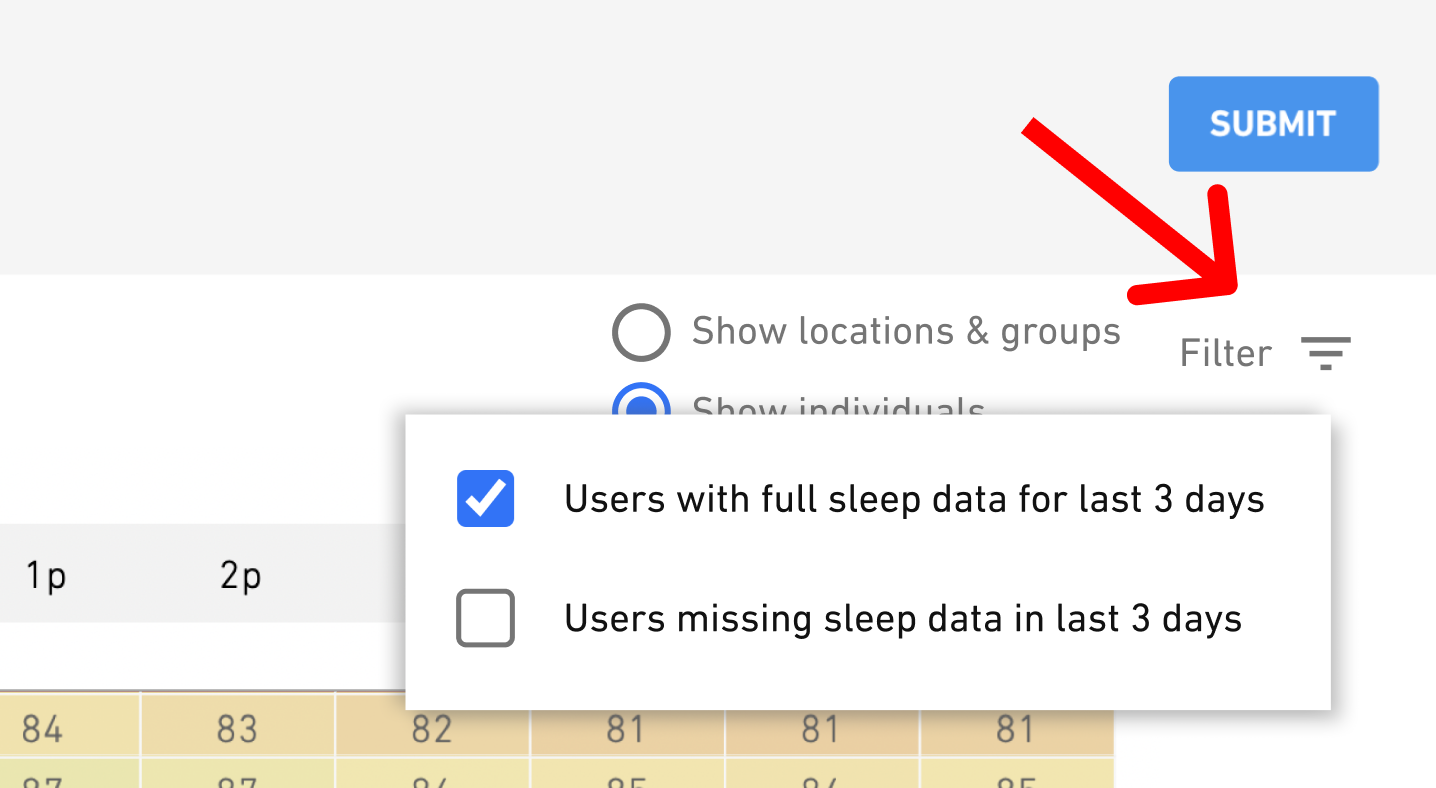 Figure D: Filtering users with or without sleep data​

While all actual recorded sleeps remain private within ReadiSupervise, the tool offers supervisors the ability to understand what estimations have been made where actual sleep data is missing. This helps supervisors gain confidence in an Estimated ReadiScore while maintaining the privacy of actual personal sleep data.

To understand greater detail, simply click on the Estimation Indicator (three circles) next to any user's name. From here, a box will appear with more information:

Figure E: ReadiSupervise estimated that Graig slept from 11:45PM to 6:50AM

In this interface, a supervisor is also presented with two options for overriding the automatic estimate of sleep: